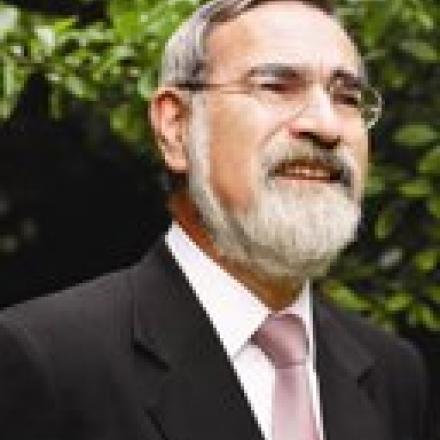 Jonathan Henry Sacks, Baron Sacks, Kt, is the Chief Rabbi of the United Hebrew Congregations of the Commonwealth. His Hebrew name is Yaakov Zvi. As the spiritual head of the United Synagogue, the largest synagogue body in the UK, he is the Chief Rabbi of the British Orthodox synagogues, but he is not a religious authority for the Federation of Synagogues or the Union of Orthodox Hebrew Congregations or the other movements, Masorti, Reform and Liberal Judaism. Lord Sacks has been Chief Rabbi of the United Hebrew Congregations of the Commonwealth since 1991.
Baron Sacks was educated at Gonville and Caius College, Cambridge; he pursued postgraduate studies at New College, Oxford, and King’s College London. The Chief Rabbi holds 14 honorary degrees, including a Doctor of Divinity conferred by the Archbishop of Canterbury. He has received a number of prizes, including the Jerusalem Prize 1995 for his contribution to diaspora Jewish life and The Ladislaus Laszt Ecumenical and Social Concern Award from Ben Gurion University. He was knighted by Her Majesty The Queen in 2005 and made a Life Peer and has written 24 books, a number of which have won literary awards, including the Grawemeyer Prize for Religion in 2004 for The Dignity of Difference.